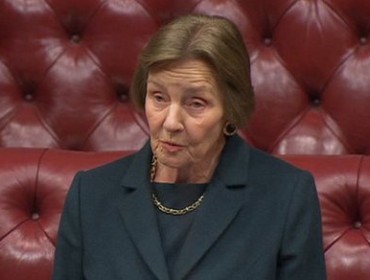 Baroness Perry is an educationalist, a Conservative politician and a member of the British House of Lords. She served as one of Her Majesty’s  Inspectors of Schools in England for 17 years, in 1981 attaining the rank of Chief Inspector.  In 1986 she became Vice-Chancellor of South Bank Polytechnic, and serving during its transition to a university became the first woman in history to run a British university.

In 1994 Baroness Perry was elected Head of Lucy Cavendish College in Cambridge University where she served until 2001. After leaving Cambridge she took on various roles, including Pro Chancellor of Surrey University, Chair of Council at Roehampton University and was made an Honorary Fellow of Girton and Lucy Cavendish Colleges in Cambridge University.
For more than 40 years, Baroness Perry has made a major contribution to Higher Education in many roles, including: President of the Foundation for Higher Education, Chair of the All-Party Parliamentary Group on Universities for 13 years and chair, trustee and president of many higher education establishments. She has been awarded eight Honorary Doctorates and 7 Honorary Fellowships.

Baroness Perry has hosted the NCUP luncheon at the House of Lords, yearly, since April 2016,  and at the most recent, in May 2019, Sir Oliver Letwin MP spoke on ‘The Meaning of  a University’.

In October 2016, Baroness Perry became the Patron for the National Conference of University